Cordially invites you to the

Sponsored by the University of Illinois Alumni Association

and our
2015 Club Scholarship Winner
TBA 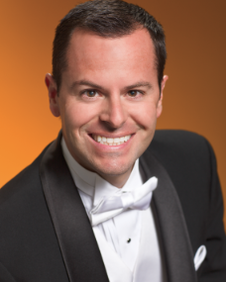 Barry L. Houser is the Assistant Director of Bands and Director of Athletic Bands where his responsibilities include conducting the Wind Orchestra, the Athletic Bands, and the Marching Illini in addition to teaching marching band procedures and other courses. Professor Houser’s teaching experience encompasses both extensive public school and university experiences.

A native of Indiana, Professor Houser served as Director of Bands and Performing Arts Director at NorthWood High School in Nappanee, Indiana, where his bands developed a reputation for great musicianship which in turn earned the program state and national recognition. Prior to his position at NorthWood, Mr. Houser served as the Assistant Director of Bands at Buchholz High School in Gainesville, Florida. Bands under Houser have performed at the Macy’s Thanksgiving Day Parade, the NBC Today Show, the ISSMA State Marching Finals, and the IMEA State Convention. Other performances include the Indianapolis 500 Parade, the Target Thanksgiving Day Parade, the Outback Bowl Parade and Half-Time Show, the Hollywood Christmas Parade, the Washington DC National Memorial Parade, Chicago Bears Game, and performances with Maynard Ferguson and the Dallas Brass.

Professor Houser is active nationally as a guest conductor and clinician in both the marching and concert mediums.  He is one of the directors of the Macy’s Great American Marching Band and has served as Co-Director of the National Events Mass Band, which performs annually at the Chick-Fil-A Bowl in Atlanta, Georgia. He is a recent contributing author for the popular marching band textbook "The System" by Gary Smith.  Recently appointed, Houser is starting his first term as Governor of the North Central District of Kappa Kappa Psi. Houser is also the Director and Head Clinician for the renowned Smith Walbridge Clinics, one of the largest marching band / leadership camps of its type in the country.

***Please be sure to follow all steps, including "Submit Transaction" and then "Confirm RSVP." If you do not receive a confirmation e-mail within a few minutes, you have not completed the registration.

Official Member of the University of Illinois Alumni Network